Alyssa Milano is Sorry Not Sorry

Reading Alyssa Milano’s new book of essays, Sorry Not Sorry, feels like having an uplifting, energizing and hilarious conversation with a passionate, literate, well-informed, fearless and outspoken friend, and if your politics run liberal you will find the book to be a total delight. Through its 32 short chapters, the topics run through racism, Black Lives Matter, patriarchy, the #MeToo movement, taxes, healthcare, prison reform, the Supreme Court, voting rights, Q-anon and MAGA, and so much more. 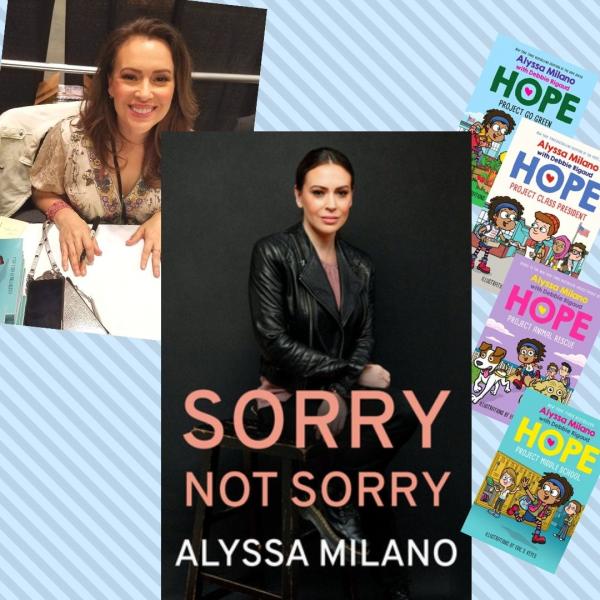 As she weaves through these topics, you’ll look back on the Lincoln-Douglas debates of 1858. You’ll ponder political discourse by way of Virgil’s Aeneid. You’ll be taken to impoverished villages in war-torn Angola. The concept of being a political ally is illuminated by the biblical story of Shimei and David. You’ll read about the early days of penicillin.

Wait, I can sense you thinking. I thought you said this would be ‘uplifting, energizing and hilarious?’ Okay, then try these excerpts. On Donald Trump:

That man never in his life uttered a substantial sentence that didn’t end with “and I want fries with that.”

On taxes and the wealthy:

I’m even angrier at those of us who complain about taxes, who do everything they can to avoid paying taxes, and who work to make sure tax money doesn’t go to those who need it most. People who claim a net worth of billions and pay taxes of $750, for example. People who have the money to have capital gains, and who also have the audacity to think this income should somehow be less taxable than the honest wages of a dishwasher making ten dollars an hour. The entitled investor, the bully billionaire, the selfish beneficiary of a large inheritance. The entitled elite.

Nearly universally, these are people who have never known hardship. These are people who grew up in wealth and whose idea of austerity means vacationing on this continent instead of on another. These are people who make their wealth on the backs of the hard work of others—who often pay higher tax rates than they themselves do, at much lower incomes—and who feel entitled to every last benefit they get while deriding those who need help. They sicken me, and the lawmakers who make sure they are first at the trough sicken me even more.

After everything he did, after every horrible thing he said, after hundreds of thousands of dead Americans had stacked up at his feet because of his COVID failures, after tens of thousands of proven lies, after the racism and bigotry and flat-out stupidity (yes, I hate that word, but he wanted to nuke a hurricane, for fuck’s sake) that came from Donald, seventy million American citizens still thought he was the better choice. I can’t wrap my brain around it, and that makes it so much harder to figure out how to move forward.

My daughter, Bella, will someday google me. It’s the nature of the beast, but I so dread that day. I’ve worked for thirty years to make the world a better place, starting as a teenager. I know in that time, I’ve grown. I’ve evolved. I’ve fucked up, and I’ve always tried to learn from it. I’ll fuck up again, and I’ll try to grow from that. The growth is the only difference between me and the people trying to silence me—they forgive their own mistakes but nobody else’s. And a lot of what Bella sees when she does look for me on the internet will be these sad bullies trying to paint her mother as a bad person who should shut up and look pretty on the screen.

Well, fuck that, and fuck you if you think I’m going to.

So yeah, it’s like a conversation with a friend: sometimes earnest, sometimes giddy; sometimes deep, sometimes potty-mouthed; sometimes filled with certainty, sometimes working through doubts. She is clear about the places of privilege she lives in as white, successful and financially comfortable, but she always struggles to listen and learn from the experiences of others. To listen to her work through issues of racism, patriarchy, of how to be a political ally to others, of language and political correctness, of how to live your life in alignment with your politics—it is both inspiring and comforting. It is the freedom that comes from not feeling afraid or ashamed of your doubts, your mistakes, of working through political issues and sometimes holding contrary opinions.

I confess that I have zero knowledge of her acting work—sorry, Alyssa! I’ve never seen a single episode of Who’s the Boss or Melrose Place or Charmed, and I don’t know that I’ve ever seen any of her movies. But I have been aware of her extensive political activism at home and abroad. It can sometimes be easy to dismiss actors as credible political spokespersons. We see them as products of Hollywood, as steeped in a fame built on pretending to be people they aren’t. And yet, there are so many actors who have indeed shown they are informed and passionate in their politics, and are humbly grateful that their lives have given them a platform from which to reach a greater audience with their advocacy.

Milano is one of them, and I would say one of the best. She won’t be silenced by the social media bullies and haters, she’ll step up and admit when she’s made a misstep, and will learn from it. So, get Sorry Not Sorry, and spend some time in the company of someone who feels like a good friend. (And for the starry-eyed among you, that’s OK. Though the book is mostly about politics, she sprinkles in tales of her acting, her marriage, her family, and other personal memories. Enjoy them as well!)