The Amur River, by Colin Thubron, and the urge to travel 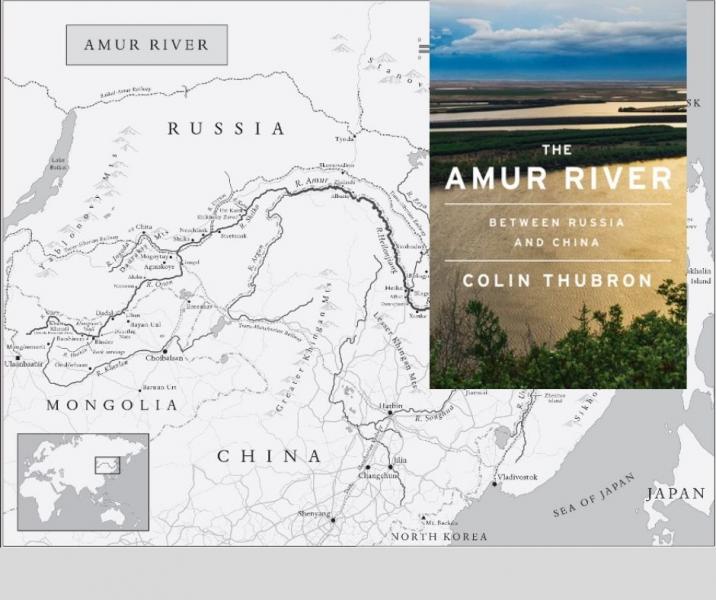 I do love travel writing, and Colin Thubron is one of the greats. In his new book, The Amur River: Between Russia and China, he travels the length of the Amur, a little-known river despite being the tenth longest in the world. Along the way, Thubron suffers chronically sore, swollen ankles and ribs, gets dragged along the ground by a runaway horse, is a passenger in a car that crashes into a ditch, hitchhikes solo between towns in remote regions that almost never see Westerners. He mostly travels alone, only occasionally with a guide. He sleeps in guesthouses such as one that “is a gaunt room, asthmatic with dust. The beds that line the walls hold a few threadbare blankets and their mattresses are soiled with overlapping stains of urine. Some filmy water stands in a plastic tub.”

Did I mention he was in his eighties when he did this?

I suppose there are some who read this and think “Why on earth would someone subject themselves to all that at that age!?” Others, myself included, think “Oh please, let that be me when I’m in my eighties!” Well, in truth, perhaps my tolerance for tribulation amidst the adventure doesn’t extend quite that far, but the experiences I yearn for aren’t too far off. I understand this urge to travel.

The book opens in Mongolia, at the bucolic headwaters of what will eventually become  the Amur, a barely inhabited stretch of thousands of miles of mountains and boggy grasslands. Thubron is traveling through this sacred Genghis Khan territory on horseback, with one guide and two horsemen. The horses are tough, scarred and partly untamed. They periodically bolt and leave rucksacks scattered across the landscape to be retrieved. At one point, Thubron’s stallion stumbles in the uneven terrain, briefly trapping the author beneath its torso. The horse rights itself and bolts, with one of Thubron’s feet still caught in the stirrup. Fortunately, he is dragged only a short distance before he manages to slip his foot out of his loose sneaker.

In Mongolia, the author finds a sense of pride, of survival. The Soviets had sought to wipe out the local culture, but now there is a resurgence in pride, a veneration of the glorious past of Genghis Khan, of their nomadic lifestyle. But soon, this phase of the journey ends. Thubron bids farewell to his Mongolian comrades and crosses into Russia alone.  (Click READ MORE below for the rest of this post!)

Batmonkh and Tochtor are quietly worried at my leaving them. Where will I stay? How will I go? I don’t know, of course. The solicitude in Batmonkh’s face gives me a pang of apprehension. Perhaps I have come to rely on his resourcefulness too much, and on a kind of reticent concern. Now he asks me to write to him, and perhaps send him something to read. We embrace in a clumsy bearhug. Then I am walking to the Russian frontier with new excitement and a tinge of fear.

And so his journey continues, travelling solo for the thousands of miles to the Pacific Ocean, crisscrossing the frontier between Russia and China, a long border marked with a mixture of economic interdependence and ever-simmering mutual hostility and suspicion. Oh, not always alone; he picks up a number of travelling companions along the way. Yet still, essentially alone. At age 80.

I only recall Thubron making reference to his age a couple times, and then only as something that made the locals latch onto him. Age is not an issue for him. He’s a traveler, always has been and always will be, and that is where his doubts and occasional philosophical musings arise.

“My room is large, and I gather blankets and pillows from it’s other beds to cushion my ribs and ankles before sleep. At night there is nothing to divert you from your pain. You wonder if you should return home, but know you will not. If you consider by-passing a place you’d planned to visit, it immediately torments you with its promise.”

“I feel the engulfing solitude of where I am, and with it a sensation of lightness, as if I had sloughed off a skin, while I drift into sleep.”

“In this cell, awaiting news that may not come, idleness grows more disheartening than hardship. I become more conscious of what may be forgiven, of my own injured body, of the coming cold. The somber town seems more elusive than before. The surviving café where I sit is always empty. Attempted conversations peter out. Then I feel how little I understand where I am, and travel seems an exercise in failure.”

But of course, Colin Thubron is never a failure at this. He draws people out, listens to their stories, takes in a myriad of detail, and ventures wherever his curiosity takes him. He does it in this journey, just as he did in two previous books of journeys undertaken in his seventies, a circumambulation of the sacred Tibetan Mount Kailash in To a Mountain in Tibet, and his seven thousand mile journey from Syria to Xian, China, via Iraq, Iran, and Afghanistan in Shadow of the Silk Road.

In truth, Mr. Thubron can sometimes be too academic for my taste. In his thorough recounting of history, the thrum of personages and places names and dates can feel as soporific as a nighttime bus ride though an empty landscape. And yet...that history also feels essential, even if I sometimes speed-read through it.

There is an odd tension among such dedicated travelers as Thubron, whereby in some respects they know more about a place than do the people who live there, while in other aspects are learning from scratch about a place from the lives of those very same people. For example, in Fujian, China, where the river is the border between China and Russia, he meets a young couple. They run a local kindergarten, and “seem innocent of politics or history. Those matters are managed elsewhere. If their internet is sanitized, they do not know or will not speak of it.” They have a car. She is pregnant with their second child. They point out how the town is on the rise, with both a railway station and a small airport now. The couple, intrigued by this chance to interact with a Westerner, offers to drive Thubron to where the Ussari River flows to the Amur.

On the Ussari’s distant bank, near the rivers’ confluence, we can make out a Russian village and a lonely watchtower….Tentatively, I mention the Treaty of Peking, by which Russia seized these lands. The kindergarten teachers remember it dimly from their schooldays. There is nothing in those mountains, they say, and when I murmur that Chinese poachers penetrate them, they lift their hands in horror. ‘No! Nobody goes there!’ But they still call them by their Chinese name, Zhuajishan.

This dichotomy between knowing so much about the history, politics and economics of a place while at the same time learning everything about daily life there from the inhabitants reaches an amusing point when Thubron is arrested in Sretensk, Russia, held for hours and threatened with deportation. His interrogators grill him about why he is traveling alone, what he’s doing there, who he knows, why he has spent five days there. At one point they ask him what they evidently consider a real ‘gotcha’ question:

But he demands, “Where have you been in Sretensk?”

I might answer that there is nowhere to go in Sretensk. But instead I hear myself talking about the waterfront and the river traffic in the nineteenth century; and seeing the cold eyes glaze in boredom, I enthuse on about Sretensk’s past importance as a link between Europe and the Russian Pacific.

Soon he is looking at me with open hostility. “Where did you learn all this? How do you know more than we do?” No glimmer of irony touches him. [Emphasis mine.]

So, what do you say? Do narratives like this make you brew yourself a cup of tea and breathe a sigh of relief that you are comfy and cozy at home, or do they make you pull out your atlas and follow along, with a heart filled with your own dreams of adventure?

Photo: Colin Thubron with two of the Mongolian Horsemen who acconpanied him at the beginning of his journey. 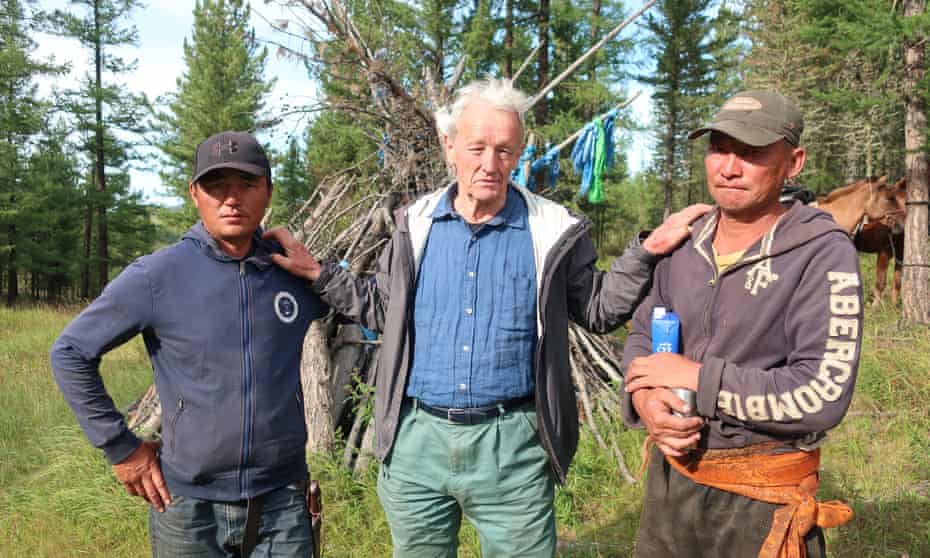