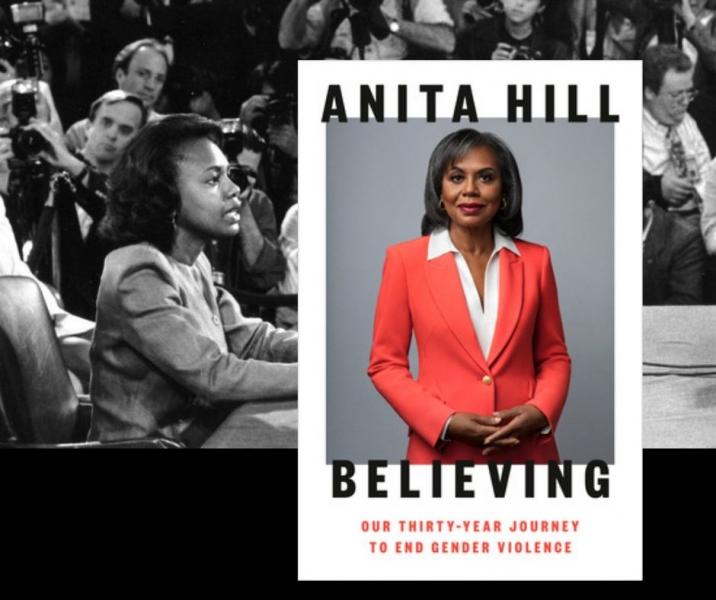 Anita Hill’s powerful new book Believing: Our Thirty-Year Journey to End Gender Violence catalogs in detail what has transpired in the 30 years since the Clarence Thomas hearings, both the continuing forms of gender violence of all types, and also the occasional legislative and legal victories against that violence. But while she praises the work being done and those victories achieved, her primary focus never flinches from the deeply systemic roots of the problem, and how the current piecemeal legal approach thus far has been a valuable but ultimately inadequate response. Ending gender violence can only be accomplished by changing “the culture that supports it and the structures that enshrine it."

Aside from a chapter that looks at the suffragette era, Believing focuses mostly on the recent past and up to the present. She points to a survey done by mainstream women’s magazine Redbook in 1976 as “the first national attempt to get the facts about sexual harassment in the workplace.” This survey of 9,000 women was shocking at the time, laying bare a problem that until that point had been ignored for the most part, and even this survey focused almost exclusively on white-collar jobs.

The prevalent attitude at the time was that these experiences described by women were unfortunate, but nevertheless simply a natural, normal part of life. Hill quotes a 1976 decision in a civil rights discrimination case by federal judge Herbert Jay Stern:

“The abuse of authority by supervisors of either sex for personal purposes is an unhappy and recurrent feature of our social experience…It is not, however, sex discrimination within the meaning of Title VII, even when the purpose is sexual.”

Similarly, in a 1975 suit by two women who said that their supervisor took repeated unsolicited sexual liberties with them. Federal judge William Frey acknowledged the facts the women presented, but denied that it reached the level of a civil rights claim, saying the supervisor’s behavior was “nothing more than a personal proclivity, peculiarity or mannerism…satisfying a personal urge.”

Such attitudes were in full force when Hill testified before the Senate Judiciary Committee hearings on Clarence Thomas’ nomination to the Supreme Court in October of 1991. (Click READ MORE below for the rest of this post!)

Those hearings reinforce Ms. Hill’s contention that legal victories are insufficient in dealing with systemic attitudes. In the 15 years between the atrocious 1970s judicial decisions cited above and the Thomas hearings, the legal realm had in fact made some incremental improvement in finally recognizing that sexual harassment constituted a civil rights violation under Title VII (thanks in large part to the work of federal judge Spottswood Robinson III, a Lyndon Johnson appointee steeped in racial civil right activism). But Senate hearings have their own rules, and in 1991 the old attitudes dominated.

Hill focuses especially on Senator Arlen Specter of Pennsylvania in those hearings. In response to a question from Senator Joe Biden—“Can you tell the committee what was the most embarrassing of all the incidents that you have alleged”—Hill, not really knowing how to ‘rate’ the varieties of repeated harassment from Thomas, decided to answer with how Thomas would discuss pornography with her. Later in the hearing, Senator Specter seized on that answer:

“Professor Hill,…[y]ou testified this morning, in response to Senator Biden, that the most embarrassing question involved—this is not too bad—women’s large breasts.” He misstated both Biden’s question and my response. “That is a word we use all the time. That was the most embarrassing aspect of what Judge Thomas had said to you,” he continued, disparagingly belittling me for being upset that Thomas wanted to discuss pornography in the office….

Specter had made his point, signaling his empathy—or himpathy—for Thomas. He said “breasts” was a word “we” use all the time. But who was Specter’s “we”? Who were the “we” that talked about women’s large breasts in the workplace all the time?

That phrase, “not too bad”, is used throughout the book, and has become a catchphrase for discussing society’s continuing diminishment of gender violence, most notably as the title of Roxane Gay’s 2018 book Not That Bad: Dispatches from Rape Culture.

Next, she  flashes forward 27 years to 2018, to the Brett Kavanaugh nomination hearings before the Senate Judiciary Committee. Once again, a nominee with credible accusations of sexual assault. Once again, his accuser, in this case Christine Blasey Ford, was demeaned, doubted, disparaged, and diminished. Once again, corroborating testimony was suppressed by Senate rules. And all this despite the legal advances of the preceding decades, and of the #MeToo movement that had ignited the year before.

Following the review of these two hearing, Believing offers multiple chapters detailing the varieties of gender violence. It’s all here. There’s the continuing discounting of workplace harassment as a real problem, and the burying of it beneath enforced arbitration settlements and nondisclosure agreements, with examples ranging from corporate boardrooms to restaurant back rooms. There’s the double standards to which women in politics and in the workplace are held to in order to prove their worth. There is the still considerable pay gap between men and women.

Ms. Hill gets is unafraid of deep analysis of difficult subjects. Her chapter on gender violence among school-age children shows how society downplays bullying, harassment and worse among children as some sort of normal stage of ‘child’s play’ rather than a reflection of the sexist, racist and gender-normative views of society they are living in.

She takes on the complicated issue of how younger generations are in many ways more tolerant of difference, yet still can’t seem to escape upholding systemic gender violence through ‘bro culture’ in tech companies, and the online harassment in social media, chat rooms and online gaming. She examines the specific difficulties women can face in Native American and other communities of color, where there is an anxiety about airing ‘dirty laundry’ in front of the dominant culture, or the very real danger that can arise from involving police in a domestic dispute or sexual assault.

She also doesn’t shy away from the fact that three of our last five presidents have had sexual assault allegations against them. She takes on the thorny differences between how activists across the political spectrum treated Clinton, Trump and Biden. She views the problem as just another example of the systemic diminishment of gender violence. “Without a reliable and trustworthy system for reporting claims of sexual assault against men in powerful positions, the public is left to figure out the truth on its own.” Still, her navigating the issues of political expediency degrading what normally would be firmly-held political beliefs was the sole weak point in her arguments. And regarding Biden’s ‘apology’ to her in the leadup to his 2020 presidential run, she says she was most struck by the fact that he apologized for what he put her through, but did not think to apologize for what he put the country through. Again, righting a single wrong, but failing to acknowledge the systemic gender biases behind that wrong.

After putting us through the wringer for hundreds of pages, Anita Hill tries to soothe us a tiny bit with an optimistic ending. Perhaps finally, she says, the perfect storm of events, accusations and outrage have opened the door for society to achieve a true measure of demanding accountability and change. I’d like to believe that is so, but Hill doesn’t sugarcoat what needs to be done, and how we have every right to be enraged at how these problems have been allowed to fester for so long, how inadequate the solutions have been thus far, and how toxic attitudes are passed down from generation to generation. We are completely justified in feeling anger and outrage.

“When I first spoke publicly about my experience of being sexually harassed, at thirty-five years old, I was young and patient. Thirty years later, I make no claim to youth. And when it comes to ending violence and the inequality that it spawns, I am no longer patient.”