Black Lives Matter, then and now - 'Until I Am Free' and 'Say Their Names'

“I am clear, we are clear, that the only plan for us, for Black people living in the United States--en masse, if not individually--is all tied up to the architecture of punishment and containment. We are resolute in our call to dismantle it.” — Patrice Cullors, co-founder of Black Lives Matter, 2018

“The only thing I really feel is necessary is that black people...will have to actually upset this apple-cart….The only way we can make this thing a reality in America is to do all we can to destroy this system and bring this thing out to the light that has been under the cover all these years.” — Fannie Lou Hamer, civil rights activist,1965

Two books published this week, Say Their Names: How Black Lives Came to Matter in America, by Curtis Bunn, Michael H. Cottman, Patrice Gaines, Nick Charles, and Keith Harriston; and Until I Am Free: Fannie 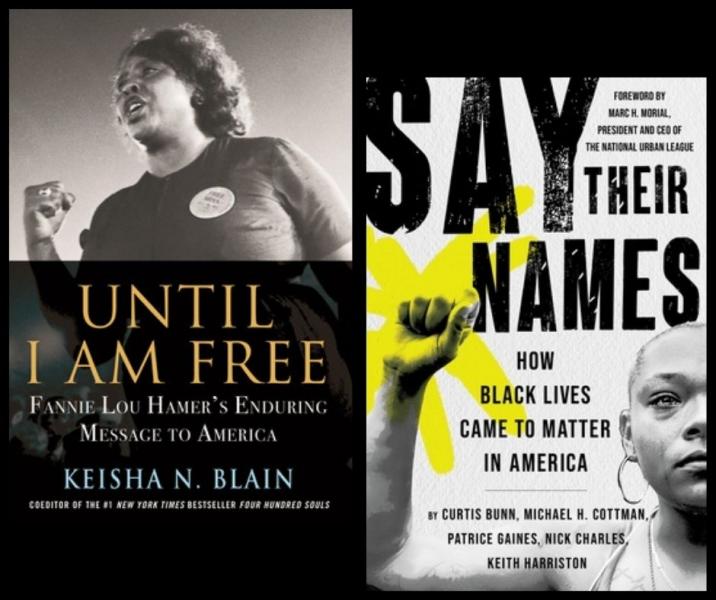 Lou Hamer's Enduring Message to America, by Keisha N. Blain, are powerful testaments to the continuing struggle for racial justice in the United States and abroad. Though the two books are nominally about different generations in the struggle, both explicitly shape their narratives around the events of the other. In Until I Am Free, Keisha Blain introduces each chapter about Fannie Lou Hamer’s life and activism with a story about one of the recent Black Lives Matter tragedies, such as Sandra Bland or Breonna Taylor. And Say Their Names draws on the entire history of racial strife in America to tell the story of the modern Black Lives Matter movement.

Black Lives Matter may very well be the largest social movement in history, with 26 million members across 60 countries. Say Their Names tells the origin story of BLM, from the unnecessary deaths of Black people at the hands of police that inspired it to the threatening backlash by white supremacists and harassment by police. It covers the various forms the protests have taken, such as the on-field demonstrations by sports figures.  The widespread support by athletes drew harsh backlash from Trump World and wobbly, often hypocritical reactions from team owners, such as the white owners of NBA teams publicly offering support but privately donating money to GOP candidates and anti-BLM groups.

The complications of inspiring a widespread social movement are covered as well. The book takes a look at some of the internal dissension that occurred in the BLM movement over things like the organization of local chapters, and financial transparency. The expanded flow of corporation money to Black causes spurred much discussion:

“Some call it ‘throwing money at the problem.’ At the same time, money speaks loudly. And having money makes it possible to do things, close gaps, cross bridges. It also amplified an undeniable fact: Black lives began to matter, at least on the surface.”

While Black Lives Matter came into being after the 2012 fatal shooting of teenager Trayvon Martin, much of Say Their Names focuses on the resurgence last year after the killing of George Foster. The tension of protesting in large groups during a pandemic is discussed, including the idea of not wearing a mask during a protest as a political choice: See My Face as analogous to Say My Name. The rightwing backlash emphasized the property damage during the mostly peaceful protests, always prioritizing property over the lives of those fighting for justice. The attitude is part of a long line of racist tropes that Black people are too aggressive, dangerous, lacking in self-control.

Like the deaths of Blacks at the hands of police, the pandemic is seen having helped bring to the surface the drastic inequalities rooted in racism. Blacks died of Covid-19 at greater rates than whites due to the many forms of health and economic disparities embedded in the U.S. system: poverty, low-paid work in ‘essential’ jobs, exposure to greater environmental poisons, food deserts where supermarkets won’t locate in Black neighborhoods, the drag on the immune system from the endless stress of daily microaggressions and threats, and poor patient care. (Click READ MORE below!)

Regarding poor patient care, Say Their Names highlights the continuing disparity in medical treatment between Blacks and whites, in part due to pernicious medical fallacies still common among white doctors:

“According to the American Association of Medical Colleges, half of young white doctors believe Black people have thicker skin than whites or have less sensitive nerve endings so they can take more pain and that African Americans’ blood hardens faster than whites.

A study performed by the Proceedings of the National Academies of Science found that 40% of white medical students in their first two years embrace the preposterous thicker-skin notion. At the same time, the 2016 study indicated Black patients were not administered the appropriate pain medicine because white doctors believed African Americans were not as sensitive to pain as whites.”

The book covers much more, both in history and in the current era of the Trump years and the immediate aftermath. It cites one bitter social media comment after Trump’s electoral defeat: “Now maybe we can get back to normal racism. This ultra racism of the last four years was too much.”

Of course, the term ‘ultra racism’ is relative. Fannie Lou Hamer grew up in Mississippi in the heart of the Jim Crow era. Born in 1917, youngest of 20 children to sharecropper parents, a life that really was just a barely disguised continuation of slavery. She was working the fields at age 6, attending school only sporadically up to age 12, while still managing to develop a love of reading. At one point, her parents had scraped together enough money to buy some mules and tools, but a white neighbor poisoned the animals. This was not uncommon, as whites were determined not to allow Blacks to gain economic freedom. Lynchings were a regular occurrence.

In 1962, at age 44, Hamer attended a meeting organized by the Student Nonviolent Coordinating Committee at a church in Sunflower County Mississippi, not far from where the infamous lynching of Emmett Till had taken place seven years earlier. The meeting changed her life completely. It was at that meeting she learned for the first time that she had the right to vote, as well as other constitutional rights. From that day forward, until her death in 1977, she became one of the most powerful voices in the struggle for civil rights.

It is impossible to read Hamer’s story without a sense of the direct line to the events of today, and the author makes that explicit in her use of Black Lives Matter tragedies throughout Until I Am Free. In 1963, a brutal beating by the police left Hamer with permanent injuries, and who cannot think of the police beatings of Devin Carter and so many others. On another occasion, police--including the brother of one of the men who lynched Emmett Till--barged into the home of Hamer and her husband, waving guns and flashlights, and who cannot think of the police bursting in and killing Breonna Taylor in a botched raid. And when Hamer is quoted as saying “I’ve gone to a lot of big cities, and I’ve got my first city to go to where this man wasn’t standing with his feet on this black man’s neck,” who cannot think of George Foster, Eric Garner, and so many others.

In 1964, Hamer addressed the Democratic National Convention in a speech seen by millions on television. The moment didn’t come easily. Lyndon Johnson tried to block the speech. Hamer was attending as part of a group of 68 alternative delegates of the Mississippi Freedom Democratic Party, which she had helped organize. The convention blocked their seating, though at one point there was an offer to seat just two of them. Much of the civil rights activist mainstream like Martin Luther King Jr., Roy Wilkins and Adam Clayton Powell wanted to accept the offer, but Hamer argued against it. Wilkins called her an ‘ignorant woman.’ Powell demanded of her ‘Do you know who I am!?’’ Hamer responded, “How many bales of cotton have you picked? How many beatings have you taken?”

Hamer did not label herself a feminist, though in practice she was at the forefront of what today would be labelled intersectionality. In this, she echoed the ambivalent attitude of Black women towards the mostly white feminist movement of the time, disdaining its focus on patriarchy without also taking on issues of race and class. As Toni Morrison put it back in the early 1970s, “In spite of the fact that liberating movements in the black world have been catalysts for white feminism, too many movements and organizations have made deliberate overtures to enroll blacks and have ended up by rolling them.” The book also tackles Hamer’s opposition to contraception and abortion, putting it in terms of her religious background and her experience with forced sterilization (a doctor removed her uterus without her knowledge or consent in 1961, and she always spoke out forcefully about the common practice.)

Throughout her mere 16 years of activism, Hamer espoused radical views. She spoke out forcefully not only about the disdain for black women in both the male civil rights community and the white Women’s Lib community, but also against U.S. intervention abroad at the cost of ignoring needed reforms at home, and about too much talk and not enough action among white allies. She complained that Black delegates were treated as criminals at the 1968 Democratic Convention, and she derided the famous 1965 report on Black families by Senator Daniel Patrick Moynihan by saying “Moynihan, who wrote about black matriarchal society, knows as much about a black family as a horse knows about New Year’s.”

And, as illustrated in the quote which opened this review, she acknowledged that more radical measures might need to be taken, given that, in her famous phrasing, “For three hundred years, we’ve given them time. And I have been tired so long, now I am sick and tired of being sick and tired.” Asked her opinion of the more militant stance espoused by Stokely Carmichael, Hamer replied:

“I think it’s a very tragic thing that this country has driven people to this point in life. The shame is not on the people, but on the country.”

Say Their Names and Until I Am Free are two excellent books to keep you aware of the history and inspire you forward in the fight for justice.