Have you heard abou the the amazing, addictive Object Lessons book series put out by the publishing house Bloomsbury? 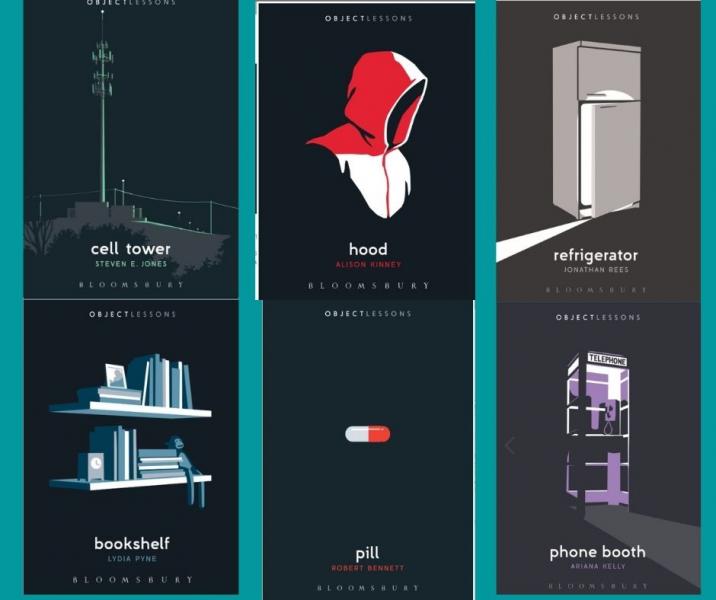 These are small books, less than 5 by 7 inches and not much more than 100 pages, and are focused on singular, specific subjects—often specific to the point of banality, as you can see from the illustration of sample titles in the illustration above. And yet, from those tiny starting points, these books take you in multiple unexpected directions. It is therefore not surprising that in Phone Booth, author and English Lit/Comparative Religion professor Ariana Kelly quotes Proust: “The past is hidden somewhere outside the realm, beyond the reach of intellect, in some material object (in the sensation which that material object will give us) of which we have no inkling.”

And where does Phone Booth take us? To Holden Caulfield wandering into New York City phone booths in Catcher in the Rye; to the disconnected phone booth set up in the ruins of Ōtsuchi, Japan after the 2011 earthquake, where people gathered to send conversations in the wind to those they had lost; to phone booths in movies from Goodfellas to The Matrix to Rosemary’s Baby to The Birds to Trading Places; to the podcast Serial, much of which hinges on a phone booth which may or may not exist; to Carlos Castaneda and his abandoned nonfiction book Dial Operator, and who in his secretive way only made calls from pay phones; to Howard Hughes, who had the Beverly Hills Hotel install a phone booth in his bungalow...and regularly swap it out for another one; to Rick Carr, who was directed by the Holy Spirit to camp out by an isolated phone booth in the middle of the Mojave Desert and answer the calls that came in; to the astounding numbers of suicides which take place in phone booths; to, of course, Doctor Who and Superman; and to so much more.

And yes, back to Proust, who in The Guermante’s Way wrote of the shock of the telephone call:

“Suddenly I heard that voice which I mistakenly thought I knew so well; for always until then, every time that my grandmother had talked to me, I had been accustomed to follow what was said on the open score of her face, in which the eyes figured so largely; but her voice itself I was hearing this afternoon for the first time.”

Phone Booth is much more than a collection of trivia and anecdotes. The book weave philosophic musings throughout, and even manages to explain how they were invented and how they work.

Refrigerator, on the other hand, gets much more into the history and technology of ice, food preservation, refrigeration, frozen food, appliance marketing, energy efficiency and other related topics. History professor Jonathan Rees makes it all very interesting, but I feel this entry in the series is a bit prosaic in comparison to most.

At the other extreme, British author Joanna Walsh uses Hotel partly as a memoir of her stint as a hotel reviewer and of her marriage break-up, interwoven with musings on everything from Freud and Heidegger to Greta Garbo and the Marx Brothers to Katherine Mansfield and E. M. Forster. You won’t learn all that much about hotels, but you’ll be transported to fascinating mental spaces.

‘Objects’ is loosely defined. Sometimes the topic is not a physical object at all. Blackface, a recent entry in the series written by Ayanna Thompson, is more a political book, deftly covering in its 144 pages the history, meaning, racist concepts and detrimental effects of Blackface performances. Similarly, Hanne Blank’s Fat examines the multiple social, political and physical definitions, identities, and meanings of her subject.

Pill, by Robert Bennett, takes a look at psychotropic medications and how society has come to define normalcy. In Bulletproof Vest, journalist Kenneth R. Rosen recounts his experiences wearing one while covering war zones, and from there jumps into both the physical structure of it to the mental allure of the illusion of safety. From Blanket to Spacecraft to Hyphen or any of the dozens of other titles, you’re certain to find things that will bend your mind. For me, it’s always a thrill to see great minds riff in unexpected ways off the narrowest of ideas.