The Book of Hope, by Jane Goodall, the 87 year old naturalist icon

I want to believe there’s hope. I really do. But it’s so hard to muster that feeling sometimes. Perhaps, at age 66, I'm too young, for here is the 87 year old Jane Goodall offering to lift me up in The Book of Hope: A Survival Guide for Trying Times, just published today.

The book was co-written with Douglas Abrams, who also wrote The Book of Joy: Lasting Happiness in a Changing World, with the Dalai Lama and Archbishop Desmond Tutu of South Africa. This new book employs 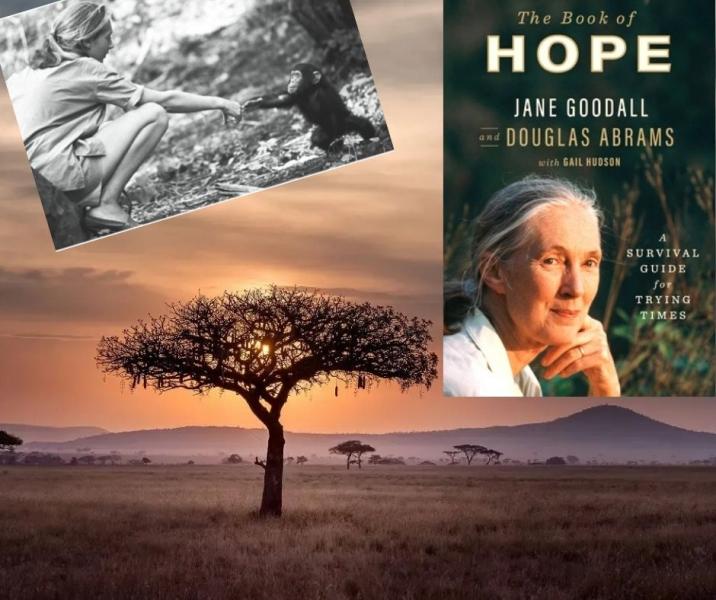 the same technique as that earlier one: it is primarily written by Abrams, based on and using extensive quotes from conversations he had with his subjects. I admit to finding Abrams’ style a bit annoying, both in the previous book and the new one; he can inject himself too much in the conversation, or at other times adopt a gee-whiz attitude of adulation that feels a bit treacly. Still, he knows how to choose powerful voices to discuss urgent subjects.

After reading The Book of Hope, my admiration for Jane Goodall has only increased. Woven throughout the book is the story of her remarkable life. There is her courageous, improbable beginning, talking her way into working with renowned paleoanthropologist Louis Leakey in Kenya in her twenties, and gaining his trust for an assignment into the Tanzania wilderness to study chimpanzees, research she has continued for sixty years. There is her decades of activism on environmentalism and climate change, conservation, social justice, and animal welfare. There is her gutsy elderhood, constantly traveling the world to bring her message to different groups, always eager to be continually learning. There is her devotion to empowering the next generations, as with her Roots & Shoots Program, her activist training for youth operating in nearly 100 countries.

But do I feel any more hopeful? Not really.

Goodall knows it isn’t easy. In the introduction to the book, one of the few sections fully in her own words, she writes:

We are going through dark times.

There is armed conflict in many parts of the world, racial and religious discrimination, hate crimes, terrorist attacks, a political swing to the far right fueling demonstrations and protests that, all too often, become violent. The gap between the haves and the have-nots is widening and fomenting anger—and unrest. Democracy is under attack in many countries. On top of all that, the COVID-19 pandemic is causing so much suffering and death, loss of jobs, and economic chaos around the world. And the climate crisis, temporarily pushed into the background, is an even greater threat to our future—indeed, to all life on Earth as we know it….”Jane is almost ninety years old,” you may be thinking. “If she is aware of what’s going on in the world, how can she still be writing about hope. She is probably giving in to wishful thinking. She is not facing up to the facts.”

I am facing up to the facts. And on many days I admit that I feel depressed, days when it seems that the efforts, the struggles, the sacrifices of so many people fighting for social and environmental justice, fighting prejudice and racism and greed, are fighting a losing battle. The forces raging around us—greed, corruption, hatred, blind prejudice—are ones we might be foolish to think we can overcome….

I have met so many people who have told me they have lost hope for the future. Young people especially have been angry, depressed or just apathetic because, they’ve told me, we have compromised their future and they feel there is nothing they can do about it. But while it is true that we have not just compromised but stolen their future as we have relentlessly plundered the finite resources of our planet with no concern for future generations, I do not believe it is too late to put things right.

Probably the question I am asked more often than any other is: Do you honestly believe there is hope for our world. For the future of our children and grandchildren?

And I am able to answer truthfully, yes.

Goodall bases her hope on four broad themes: The Amazing Human Intellect, The Resilience of Nature, The Power of Young People, and The Indomitable Human Spirit. And while I have enormous respect for those qualities, I struggle to transform that respect into hope.

Yes, the human mind is an amazing, powerful problem solver, but without the will to follow through and act on solutions conceived by that intellect, no amount of ingenuity will be enough.

Yes, nature is resilient, but some form of nature surviving doesn’t necessarily translate to a feeling of hope for humanity. Goodall offers the example of the Survivor Tree, a Callery pear tree that was recued from the rubble of the World Trade Center, and two camphor trees that survived the dropping of the atomic bomb on Nagasaki, and which continue to thrive. But for me, these miraculous survival tales of the resilience of nature do not change the fact that it is human folly that nearly destroyed them, a human folly which is equally resilient, and all too able to repeat itself.

Yes, I admire the power of young people, and yet...what is their choice. Young people are forced to act, to struggle and fight for change, and have to believe that they can make a difference. Otherwise, what is left but apathy, despair and dissolution.

And yes, the ability of the human spirit to cope is amazing. But just because we can grit our way to surviving concentration camps, homelessness, refugee flight, famine and so much else, does that really translate into believing in a better future?

At one point, young climate activist Greta Thunberg’s speech to the World Economic Forum is quoted:

It really becomes a question of defining hope. Goodall distinguishes it from mere optimism, a psychological trait in which one believes all will turn out okay in the end. Hope is the desire for a positive outcome, but it is a desire that needs to be worked for, not simply wished for. (And even here she offers shades of meaning; for example, a prisoner may hope for release but lack any concrete way to act on that hope.) Hope and action are mutually reinforcing. Hope is keyed to a sense of agency, to believe that your actions can make a difference. Hope is a trait of human survival.

It feels like circular logic: act on your hopes in the hope that your actions can bring hope. And yet, in the end, what else is there? The idea of simply giving up in the face of the overwhelming problems we face is too devastating to consider. And so, we bring to bear our intellect, our resilience, our adaptability, our belief, our power and our spirit to fight for change. What gives us the courage to do so? Well, that, I guess is hope, and perhaps Goodall has helped me find some embers of it within myself after all.