I’m taking a leap by basing this week’s essay on Last Chance Texaco, the memoir by Rickie Lee Jones, coming out April 6th from Grove Press.

The truth is, I’ve never been all that interested in music bios. I might be an outlier on that: music biographies are generally very popular. But for me, the creation and its performance was always the main event, while the backstory—the life of the artist—never really pulled my interest.

But I received an advance copy of Last Chance Texaco, and, well, I did love Rickie Lee Jones when she first came on the scene. I was somewhat enamored of her whole milieu back then in the late 1970s/early 1980s. While I never saw Rickie Lee Jones perform live, I did see Tom Waits, her off and on lover, in some memorable concerts. I even owned a vinyl record by Chuck E. Weiss, consisting of a handful of workmanlike rock and roll tracks (and some dude named Mac Rebennack on piano.)

And so, I read Last Chance Texaco. And I enjoyed it. The question is: did I simply enjoy the well-told story of someone’s life, or was my enjoyment somehow linked to the fact that it was a memoir by an admired artist? 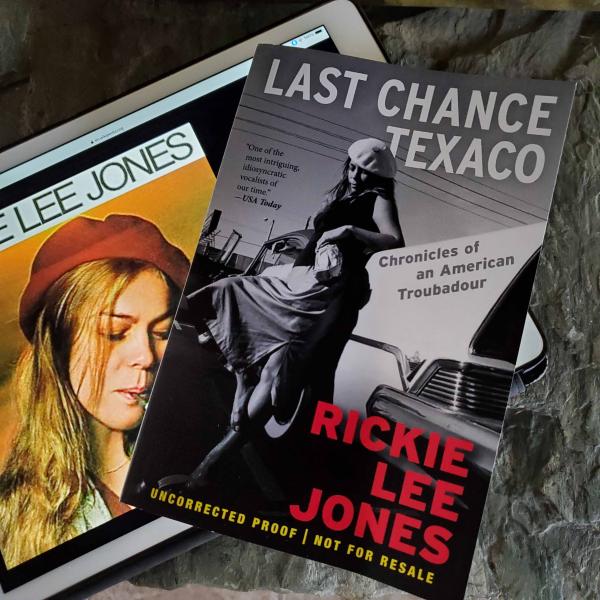 Early in the book, some of this enjoyment was due to the fact that we are contemporaries: Rickie Lee Jones was born in 1954, just 11 months before me, and I can identify with some of her childhood memories: listening to my parents’ records, the pleasures and terrors of grammar school, first time seeing the Beatles on television. But the similarities end quickly.

My boyhood was spent in San Jose, California, attending a small private Lutheran school, being raised by a mother and stepfather who, though not entirely without secrets in their past, were basically boring, conventional adults in the lower tiers of the middle class. Jones’ family life was more tumultuous:

“I have met people who grew up in homes where parents did not argue and the family did not fight. They drive the same roads each day and they live in calm and predictable homes. It is hard for me to imagine this stability (conformity) in a peaceful (boring) setting.

I have no apology for my family; they were artists and I suspect we were no worse or better than anyone else. We sacrificed for each other but we were complicated…my family life was something like a nuclear submarine waiting for the signal to destroy all known life.”

And my teens? Ha! I’ve often reflected on the fact that I was growing up just 40 miles down the peninsula from San Francisco in the heart of the 1960s, and wondered what my life would have been like had I just been a little older—and a lot more daring—at the time. Well, by the time she was 15, Rickie Lee Jones was stealing cars with her boyfriend, joyriding from Phoenix to California, been in juvenile detention, dropped acid, hitchhiked to the 1969 Newport Pop Festival in Northridge, California, been involved in drug deals in Tijuana, hitchhiked up to Seattle and fallen in with a bunch of shady characters, just for starters. Really makes me feel like I wasted my youth.

After a brief return to a sort of normalcy (“My family might beat you up, kick you out, but they’d also travel across the country to find you and bring you back home”), she felt drawn again to the rebellious life.

“I found a book at my sister’s house that would become my confidant and close friend out there in the garden shack where I slept apart from the rest of the house….The book was Been Down So Long It Looks Like Up to Me, by Richard Fariña. Fariña told me I was not the first to go for this bohemian life of hitchhiking, pranksters, pot smokers, rebellion and free love. I had lived those pages just last summer, he had lived them ten years before. I was Gnossos Pappadopoulis!”

The book winds through its next hundred pages detailing her peripatetic life but also her musical influences and development, leading to her 1979 album, the eponymous  Rickie Lee Jones. Although the very first review it garnered dissed it as “Jill Clayburgh meets Raymond Chandler and there’s a bad connection,” she soon was a sensation.

Jones writes about her heroin addiction in the years following that album and her second album, Pirates, released in 1981.

“Pirates was written at the end of my addiction when I lived on Ninth Street in Manhattan with Sal Bernardi. That was when Sal and I lost our way together. We stayed up all night and slept until 4 p.m. and rose half-dead to get high and feel half-alive again. We wrote music and read Edgar Allan Poe. We lived in the strange twilight, the slow motion fluid that fed our memories. We were junkies.

That was my light at the end of the tunnel. My way out. The words I walked towards every day. It was as if I had already quit drugs because he knew I would. I just didn’t have the date on hand.”

And so she did, pretty much on her own, cold turkey. “I started drugs alone and would leave drugs alone.”

In short, the book is full of the tropes of the genre, of musical influences and development, of difficulties overcome, of the slog towards success in a cutthroat business, of drugs and wild rides, and cameo appearances by dozens of other musicians. And it’s a good ride. But for me, the question remains: how much of the pleasure comes from simply reading a good human story, and how much comes from the fact that the story is coming from a musician, someone whose art may very well have played a role in your own life? Is reading Last Chance Texaco, or Life by Keith Richards, or Born to Run by Springsteen or Lady Sings the Blues by Billie Holiday or Miles by Miles Davis or Just Kids by Patti Smith simply the enjoyment of good stories told by an accomplished raconteur, or is it that secret thrill of glimpsing the life behind someone who provided you with your personal soundtrack? How could you not wish to know more about someone who has touched you deeply? What say you, dear reader?

PS: Much of her girlhood takes place in Phoeniz, Arizona, so lots of local interest!