”I have known men to hazard their fortunes, go long journeys halfway about the world, forget friendships, even lie, cheat, and steal, all for the gain of a book.” A. S. W. Rosenbach, rare book dealer, 1927

I had originally planned to write about this book, The Madman’s Library: The Strangest Books, Manuscripts and Other Literary Curiosities From History, in combination with other books about libraries. But I found this book so enchanting that I decided to just serve up some of its beguilements to you booklovers, and save that review of books about book repositories for the future.

The British author clearly loves his subject. It no doubt was bred into him by his father, an antiquarian book dealer who used the one-year-old author as a bid paddle at book auctions. 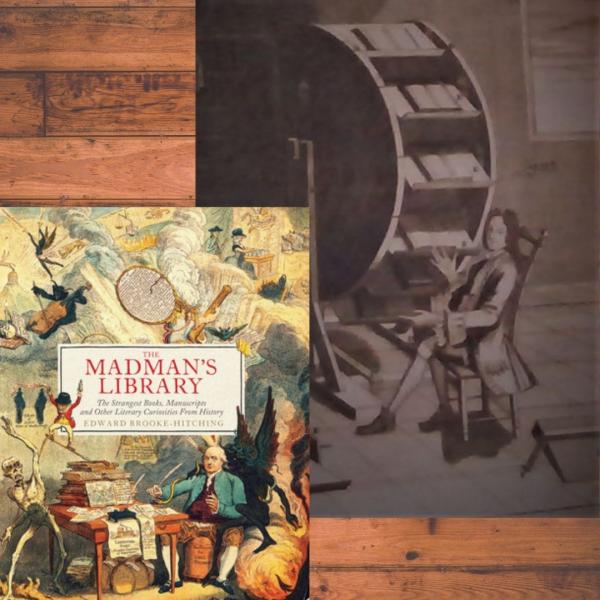 The Madman’s Library begins, fittingly, with books that aren’t books. For the most part this discussion deals with those forms of gathering knowledge that predate the codex, that system of bound pages developed in the 3rd Century and which we still associate with the idea of a ‘book,’ at least when we’re not bathed in the glow of a Kindle. This includes ancient cuneiform tablets, engraved pottery, scrolls and the quipu system of bound knots used in the pre-Columbian Andes. But he expands this category with such oddities as the Duke of Venice Francesco Morosoni’s prayer-book pistol, which could be fired when the book was closed and the silk bookmark pulled as trigger, and the catalog of the art/novelty publisher Ben Denzer, producer of such items as a bound 20 Slices of American Cheese, as in Kraft plastic-wrapped. (See the Denzer catalog of other oddities HERE, though prepare to be appalled.)

Prison writings have a long history, and sometimes a strange one as well. During WWII, the Norwegian resistance fighter Petter Moen, thrown into solitary confinement by the Nazis, wrote out a memoir by using a pin to prick out letters in toilet paper. Miraculously, the document survived and was recovered; it was published in 1949, and translated into English in 1951. Of special interest to the aficionados of the Readers and Booklovers Monday night series The Language of the Night is the labor of imprisoned Yugoslav politician Milovan Dilas, who translated Milton’s Paradise Lost into Serbo-Croatian, writing it out on toilet paper.

The chapter on Books Made of Flesh and Blood is quite macabre. Binding books in human flesh dates back to the 13th Century, but it came somewhat into vogue in the 18th Century. Most common seems to be using the skin of an executed criminal to bind a book detailing their infamy, but there are romantic examples as well. The French writer Camille Flammarion complimented a countess on the quality of her skin. The woman subsequently directed that upon her death, her skin be delivered to the writer. Flammarion used it to bind a copy of his novel The Worlds of the Sky.

Books written in blood have also been a thing, even recently. In 1997, Saddam Hussein commissioned a copy of the Qur’an to be written with his blood. Over the next couple years, an estimated 57 pints of his blood were mixed with other chemicals to produce the ink used by the calligrapher. It was on display until the fall of Baghdad, but today it is stored away while clerics and politicians decide what to do with it: on the one hand, it is haraam (forbidden) to make a Qur’an with blood, but on the other hand, it is forbidden to destroy a Qur’an. What a dilemma!

Most amazing of all is the fact that some of us reading this diary may ourselves have owned a periodical written in blood. In 1977, Marvel Comics Super Special #1, featuring the rock band Kiss, had duly notarized vials of the band members’ blood mixed into the vats of red ink used for the comic.

Books have sometimes ended up in unusual places. Mills and Boon, the wildly popular British romance novel publishing house, now a division of Harlequin, sell their romances at the rate of one book every ten seconds in the UK, helping carry their readers forward in their lives with their escapist drama and happy endings. The books help carry the Brits forward in other ways as well: 2.5 million of them were “shredded and mixed into the foundations of a 16-mile stretch of England’s M6 toll road to help bind the asphalt.”

The chapter on literary hoaxes is fun, running the gamut from a fake rare book auction that drew dozens of bibliophiles to a nonexistent site to bid on nonexistent books, to the fake Hitler diaries to Clifford Irving’s fake autobiography of Howard Hughes. But my favorite is a story of Fake News: in 1874, the New York Herald published a story about wild animals escaping from the Central Park Zoo:

‘AWFUL CALAMITY,’ cried the headline, ‘The Wild Animals Broken Loose From Central Park – TERRIBLE SCENES OF MUTILATION – A Shocking Sabbath Carnival of Death – SAVAGE BRUTES AT LARGE – Awful Combats Between the Beasts and the Citizens.’ Eyewitnesses told of animals escaping Central Park Zoo and leaving forty-nine people dead and over 200 injured. Twelve of the beasts were still missing and at large somewhere in the city, though they reported that Governor Dix had shot the Bengal tiger in the street himself.

In response to the article, William Frederick Havermeyer, the mayor of New York City, instructed the citizenry to stay inside and lock their doors. There were reports of armed mobs roaming Fifth Avenue and Broadway on a hunt for the animals, bursting into churches, offices and department stores.

The editor later admitted that he dreamed up the whole story with the noble intention of bringing attention to the shoddy living quarters for the animals at the zoo.

For those of you whose favorite authors have passed into The Great Beyond, take heart. There is an extensive genre of spirit writing books, dictated from beyond by the authors to some blessed earthly scribe. Such books include For Jesus’ Sake, a post-mortem play by William Shakespeare; the second half of Charles Dickens’ The Mystery of Edward Drood; dictated-from-the-dead journals from T. E. Lawrence (of Arabia), Oscar Wilde, Arthur Conan Doyle, and Jesus of Nazareth; and Jap Herron, written on a Ouija Board by Mark Twain, seven years after his death.

Perhaps I’ll stop there. I think I’ve given you enough of a taste of this wondrous book. Just know, as you curl up in an easy chair or lie in bed reading your novel or your history of the Mongols, that the book in your hands is part of a wild, wondrous, wacky and seemingly infinite universe of humans striving to pass on their knowledge.