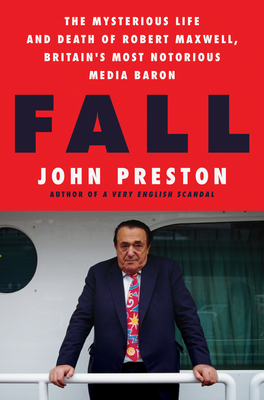 Winner of the UK’s 2022 Costa Prize for Biography

“A portrait of one of the most enigmatic figures in the annals of white-collar crime. . . . A well-researched, compelling book that uncovers many mysteries about a media tycoon.”—Kirkus Reviews

From the acclaimed author of A Very English Scandal, a thrilling and dramatic true-life account of the rise and fall of one of the most notorious media moguls of all time: Robert Maxwell.

In February 1991, Robert Maxwell triumphantly sailed into Manhattan harbor on his yacht, the Lady Ghislaine, to buy the ailing New York Daily News. Taxi drivers stopped their cabs to shake his hand, children asked for his autograph, and patrons of the hottest restaurant in Manhattan gave him a standing ovation while he dined. Ten months later, Maxwell disappeared off that same yacht in the middle of the night and was later found dead in the water. As John Preston reveals in this entertaining and revealing biography, Maxwell’s death was as mysterious as his remarkable life.

A tightly paced, addictive saga of ambition, hubris, narcissism, greed, power, and intrigue, Fall recounts Maxwell’s rise and fall and rise and fall again. Preston weaves backwards and forwards in time to examine the forces that shaped Maxwell, including his childhood as a Jew in occupied Eastern Europe through his failed political ambitions in the 1960s which ended in accusations of financial double-dealing, and his resurrection as a media mogul--and on to the family legacy he left behind, including his daughter Ghislaine Maxwell.

Preston chronicles Maxwell’s all-encompassing rivalry with Rupert Murdoch—a battle that ruined Maxwell financially, threatened his sanity and lead, indirectly, to his death. Did Maxwell have a heart attack and fall overboard? Was his death suicide? Or was he murdered—possibly by Mossad or the KGB? Few in the twentieth century journeyed as far from his roots as Robert Maxwell. Yet, as Fall reveals, no one, however rich and powerful, can entirely escape their past.

John Preston is a former journalist and arts editor of the Sunday Telegraph. He is the bestselling author of six books, the most recent of which, A Very English Scandal, was made into a BAFTA- and Golden Globe Award–winning television series starring Hugh Grant and Ben Whishaw. The film adaptation of his novel, The Dig, has been released on Netflix starring Ralph Fiennes, Carey Mulligan, and Lily James.

"John Preston tells [the story] with great verve and the benefit of extensive interviews. . . . Mr. Preston zips through Maxwell’s business and political journey. . . . The portrait that emerges is more subtly drawn than previous ones."
— The Economist

"A portrait of one of the most enigmatic figures in the annals of white-collar crime....A well-researched, compelling book that uncovers many mysteries about a media tycoon."
— Kirkus Reviews

"Preston's prose is compelling, and the mystery of this larger-than-life figure is perplexing--true crime aficionados will be absorbed."
— Library Journal

"A fascinating study in character.”
— InsideHook