Hot Nonfiction Coming Out in October

Welcome to your monthly curated preview of interesting nonfiction books coming out, courtesy of my Literate Lizard Online Bookstore. Here’s what we have for October. 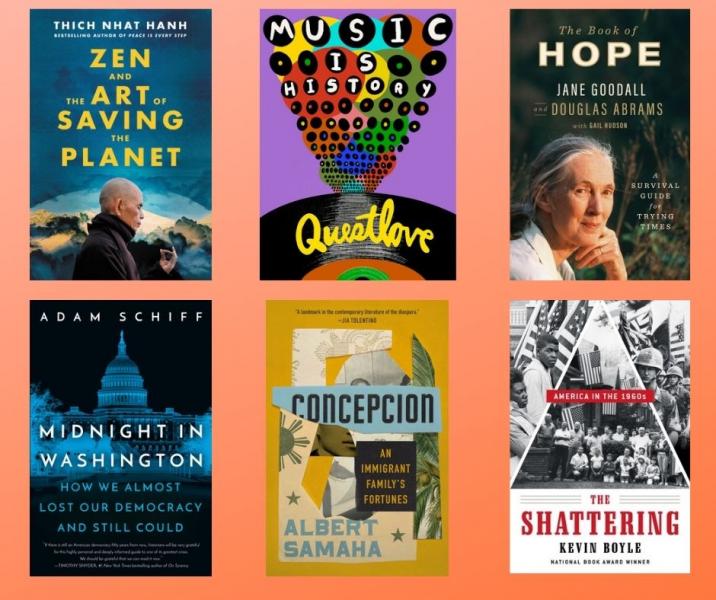 In politics, I’m looking forward to Midnight in Washington: How We Almost Lost Our Democracy and Still Could, by Adam Schiff. As historian Ron Chernow blurbed: “Although he failed to secure the conviction of Donald Trump in the first impeachment trial, Adam Schiff has now vanquished him forever in these pages.” If only! But it still should be a good read. There are two books coming out on labor and inequality in the US. American Made: What Happens to People When Work Disappears, by Farah Stockman focuses on the lives of displaced factory workers in Indianapolis, in terms of both their economic and psychological struggles. Matthew Stewart’s The 9.9 Percent: The New Aristocracy That Is Entrenching Inequality and Warping Our Culture looks at the economic lives and politics of the ten percent of Americans just below the uber-wealthy but above the 90% who have lost ground. All three of these books come out October 12th. Finally, the people behind the podcast Ear Hustle bring the experiences of the incarcerated to book form in This Is Ear Hustle: Unflinching Stories of Everyday Prison Life, by Nigel Poor and Earlonne Woods. It comes out October 19th.

The race to develop a Covid-19 vaccine has now become a race to publish a book about the race. Two are coming out on October 26th: A Shot to Save the World: The Inside Story of the Life-or-Death Race for a COVID-19 Vaccine, by Gregory Zuckerman, and The First Shots: The Epic Rivalries and Heroic Science Behind the Race to the Coronavirus Vaccine, by Brendan Borrell. Which to choose? Zuckerman is more of a business writer, particularly with The Wall Street Journal, but Borrell, who writes on many topics, got the movie deal: HBO is developing a limited series based on it.

In history, The Shattering: America in the 1960s, by Kevin Boyle attracts the interest of people of a certain age like myself who grew up in the era. But since so much of the race, gender, economic, military, education and political battles over the past 60 years are to an extent still refighting that era, this book should be of interest to all. Other history books of interest coming this month are Churchill's Shadow: The Life and Afterlife of Winston Churchill, by Geoffrey Wheatcroft, and The Approaching Storm: Roosevelt, Wilson, Addams, and Their Clash Over America's Future, by Neil Lanctot. The Churchill book is touted as a reassessment of his legacy, while The Approaching Storm examines the interactions of two presidents and influential social activist Jane Addams as they debated over America’s role in the growing global crisis of World War I. Publication date for all three is October 26th.

Three books on the immigrant experience arrive on October 12th. In Concepcion: An Immigrant Family's Fortunes, author Albert Samaha traces generations of his family’s history from the Philippines to America. In an era of rising anti-Asian hate in the wake of Covid-19, Jay Caspian Kang’s  The Loneliest Americans is timely. He looks at the Asian immigrant experience of the millions who came to the United States after restrictions were lifted in 1965, in the wake of the Vietnam War and in the years since then. In Those We Throw Away Are Diamonds: A Refugee's Search for Home, Mondiant Dogon recounts the decades his family spent in refugee camps fleeing the violence of Rwanda and the Democratic Republic of Congo.

In Black interest, the books cover a wide range of topics. A major work of history, Born in Blackness: Africa, Africans, and the Making of the Modern World, 1471 to the Second World War, by Howard W. French, covers six centuries, moving African history from its intentional obliteration to a central place in global development. It comes out October 12th. Food and recipes take top spot in Black Food: Stories, Art, and Recipes from Across the African Diaspora, Edited by Bryant Terry, with contributions from a global selection of 100 Black cultural luminaires. Publication date is October 19th. On October 26th, Glory Edim of Well Read Black Girl fame (Book and Website) returns with On Girlhood: 15 Stories from the Well-Read Black Girl Library, focusing on the writing of young women. And in the celebrity memoir genre we have Unprotected: A Memoir, by Billy Porter, in which the multi-talented actor, singer, director, composer, and playwright covers growing up Black and gay. Publication date is October 19th.

There is also Music is History, by Questlove, coming October 12th. The musician follows up his directing of the documentary Summer of Soul with this musical history of the past fifty years, choosing one song per year to represent issues of race, gender, politics, and identity. Other music and entertainment choices are Eruption: Conversations with Eddie Van Halen, by Brad Tolinski and Chris Gill, coming October 5th, and The Boys: A Memoir of Hollywood and Family, by the Howard brothers, actor/director Ron and actor Clint, arriving October 12th. Music history gets another look in Sellout: The Major-Label Feeding Frenzy That Swept Punk, Emo, and Hardcore (1994-2007), by Dan Ozzi (October 26th), as does movie history in Leave the Gun, Take the Cannoli: The Epic Story of the Making of The Godfather, by Mark Seal, arriving October 19th.

In celebrity categories all their own, we have yet another posthumous appreciation of globe-trotting adventure foodie Anthony Bourdain, with In the Weeds: Around the World and Behind the Scenes with Anthony Bourdain, by Tom Vitale (October 5th). Actor Stanley Tucci also shows off his foodie chops in Taste: My Life Through Food (October 5th). Alyssa Milano delivers a memoir focused on her political activism and humanitarian work in Sorry Not Sorry (October 26th). Katie Couric covers a lot of gender challenges in her broadcasting career in Going There (October 26th). The prize of the month is Renegades: Born in the USA, in which Barack Obama and Bruce Springsteen shoot the breeze about life, music and politics, with lots of photos and archival material thrown in. Renegades comes out on October 26th.

In social history, we have Capote's Women: A True Story of Love, Betrayal, and a Swan Song for an Era, by Laurence Leamer, which details Capote’s complicated friendships with a number of socialite women, along with what those women saw as his betrayal of them in his thinly veiled unfinished novel Answered Prayers. It comes out October 12th. Essayist Susan Orlean collects her writing about animal-human relationships in On Animals, coming out October 12th. In Orwell’s Roses, Rebecca Solnit, best known for her feminist writing, reflects on how George Orwell’s love of gardening shaped his political writing. It comes out October 19th. New York Times Book Review editor Pamela Paul gives pause to all of the internet addicts out there with 100 Things We've Lost to the Internet, coming October 26th. And Girly Drinks: A World History of Women and Alcohol, by Mallory O’Meara, offers a feminist history of booze and bars. Get it October 19th.

Two books strive to help you save your sanity while waging the stressful fight to save the planet. On October 19th, naturalist Jane Goodall brings us The Book of Hope: A Survival Guide for Trying Times, and on October 5th, Buddhist teacher Thich Nhat Hanh offers  Zen and the Art of Saving the Planet.

Finally, two books for kids. Elizabeth Warren is back on October 12th with Pinkie Promises, Illustrated by Charlene Chua, about dreaming big, and Notable Native People: 50 Indigenous Leaders, Dreamers, and Changemakers from Past and Present, by Adrienne Keene and illustrated by Ciara Sana, gives snapshot profiles of fifty Native Americans throughout history. It comes out October 19th.