A May Day Look at Indie Publisher Haymarket Books 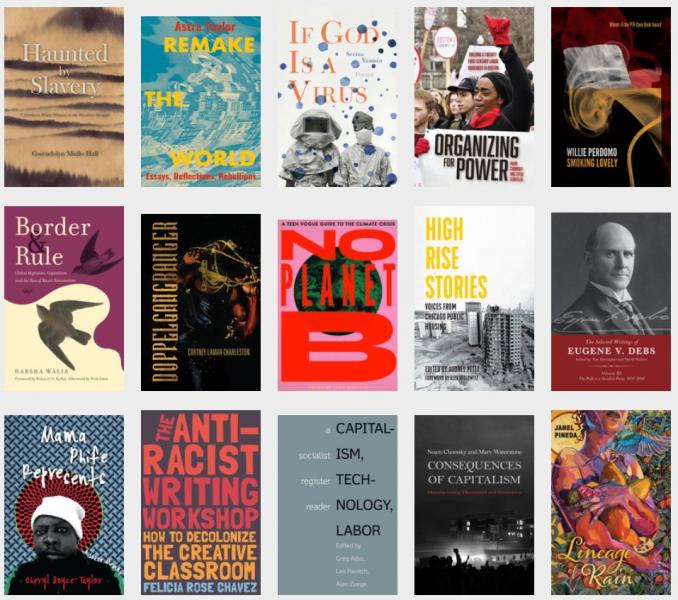 It’s May Day, and to celebrate this important Labor commemoration (in most of the world, anyway,) we’re spotlighting Haymarket Books. This indie publisher celebrates its 20th anniversary this year. As you might guess from its name, they are based in Chicago and take their inspiration from the 1886 Haymarket Affair, that essential landmark in U.S. labor politics. Their mission statement is “to publish books that contribute to struggles for social and economic justice, including books that wouldn’t necessarily find a home in a more risk-averse publishing world dominated by a few large corporations.”

Browsing through their catalog, I’m reminded of the days back in the late 1980s/early 1990s when I would attend the annual Socialists Scholars Conference in New York City. In that era, the Conference was in its second incarnation, having evolved from an earlier, more academic and more Communist framework to a gathering sponsored by the Democratic Socialists (think Bernie Sanders and Michael Harrington) and attracting liberals from a wide swath of progressive thought, with lots of political panels on every topic. It was at that point the largest gathering of liberals in the country, at its peak drawing as many as 2000 attendees.

In other words, it had the invigorating energy, networking opportunities and broad scope of Netroots Nation, but the Old Guard was still very much in evidence. There was a lot of dour earnestness, and a small groups refighting old ideological battles of Marxism. And so it is with the Haymarket catalog: among their 800 books there are no fewer than 35 books on the Russian Revolution, and some 88 titles in the category of Marxism and Socialism.

Not that there’s anything wrong with that! Plenty of great books to be found there! But the important question is how well Haymarket has evolved to 1) represent modern leftist thinking on feminism, racism, Native Americans, environmentalism, LGBQT+, intersectionality, etc., and 2) cut back on the dour earnestness. On the whole, I’d say they are doing very well. (I can also report that in person they are not at all dour and earnest, as I’ve spoken with their team at book marketing events many times over the years.)

Haymarket books are generally serious, well-researched and often polemical. You won’t find a lot of humor here, but their stable of authors include a number of excellent wordcrafters like Rebecca Solnit (Men Explain Things to Me, Whose Story is This, among others), Angela Davis (Freedom Is a Constant Struggle, and the forthcoming Abolition. Feminism. Now. and Angela Davis: An Autobiography,) and Arundhati Roy (Azadi: Freedom. Fascism. Fiction., Capitalism: A Ghost Story, Things That Can and Cannot Be Said, among others. And while they aren’t the primary publisher of some authors like Noam Chomsky, Howard Zinn, Naomi Klein and Mike Davis, they publish smaller works by those authors.

Haymarket also has a vibrant online presence. Their YouTube channel is a cornucopia of streamed talks with authors and experts on every subject imaginable to the progressive movement. They also offer Apple podcasts and are active on Twitter and Instagram.

The publisher also offers an excellent book club deal: for just thirty dollars per month, you get a print and eBook of every one of their new releases, as well as 50% off their backlist.

Here is a small selection of some of their titles across many categories available on our website.