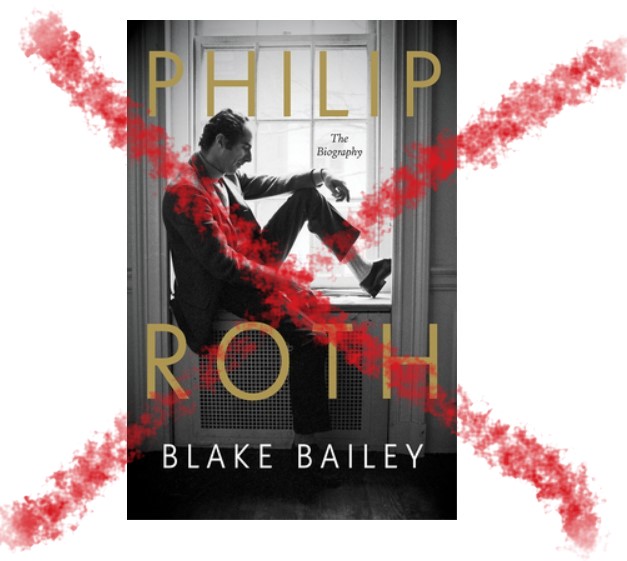 Publisher W.W. Norton has pulled the recently published biography of Philip Roth from distribution after allegations of sexual assault against the biographer Blake Bailey. This is a huge move, as the book, published April 7th, was considered one of the biggest books of the publishing season. W.W. Norton will also make a donation in the amount of the advance paid to the author to organizations who offer support to victims and survivors of sexual assault

The allegations against Blake Bailey hit the news a week ago with a front page article in The New York Times:

Now, allegations against Mr. Bailey, 57, have emerged, including claims that he sexually assaulted two women, one as recently as 2015, and that he behaved inappropriately toward middle school students when he was a teacher in the 1990s….

Several of the allegations against Mr. Bailey focus on his behavior when he was an 8th-grade English teacher at Lusher, a middle school in New Orleans, but a previously unreported allegation is from 2015.

That same year, Valentina Rice, a publishing executive, met Mr. Bailey at the home of Dwight Garner, a book critic for The Times, and his wife in Frenchtown, N.J. A frequent guest at their home, Ms. Rice, 47, planned to stay overnight, as did Mr. Bailey, she said.

After she went to bed, Mr. Bailey entered her room and raped her, she said. She said “no” and “stop” repeatedly, she said in an interview.

The allegations detail how Bailey used a ‘groom and wait’ tactic with the middle school girls he taught, establishing a trusting relationship with them in their youth, and then seeking them out when they were older. Former middle school students describe multiple ways he would groom them by telling them how “funny and smart they were, which made them feel special. He would also make off-color jokes that made them feel like they were his equals.” He would stay in touch as they entered high school, often with more risque comments, and once they reached adulthood would seek to date them. More recent allegations of sexual assault and rape show that his predations weren’t limited to his students.

Bailey has denied the allegations, but his denials are problematic in themselves. A statement issued by his lawyer stated that:

“Mr. Bailey has never acted inappropriately with any student and has never received any complaints about his time at Lusher more than 20 years ago.”

Gibbens’ statement continued: “It is absurd to suggest that he was grooming students for anticipated encounters as adults many years later. The allegations in your email are false, hurtful descriptions of conduct between adults. Mr. Bailey has never treated a woman inappropriately and has never forced himself on a woman.”

And yet, Bailey himself has emailed some of his accusers with such charming denials as “Whatever the rumor mill says, I had sex with no minors or students who were my students at the time. My behavior was deplorable, but I did nothing illegal.” Or this: “For what it’s worth, you weren’t in 8th grade when the night in question occurred; you were in your 20s and I was in my 30s (just), and for the record I wasn’t attracted to you when you were in 8th grade and have never laid a glove on any student, while she was my student, including college and grad school students,”

Books and book deals being canceled by publishers have been in the news a lot recently. Simon and Schuster canceled a book by seditionist Senator Josh Hawley back in January, declined to distribute a book written by one of the cops who shot Breonna Taylor, and has also just received a petition from 200 employees joined by 3500 others demanding it cancel the two-book deal it just signed with Mike Pence (and they’ve also contracted for a book by Kellyanne Conway.) Just over a year ago, Hachette dropped Woody Allen’s memoir.

In short, a debate is roiling over the role of publishers as gatekeepers over who is allowed to tell their story. In the case of Simon and Schuster, their two responses encapsulate the debate. Regarding the Hawley book, they said “As a publisher it will always be our mission to amplify a variety of voices and viewpoints: At the same time we take seriously our larger public responsibility as citizens, and cannot support Senator Hawley after his role in what became a dangerous threat.” But in their initial response to the Mike Pence controversy (a position which may very well change,) S&S  states: “We come to work each day to publish, not cancel, which is the most extreme decision a publisher can make, and one that runs counter to the very core of our mission to publish a diversity of voices and perspectives. When we allow our judgment to dwell on the books we dislike,” he wrote, “we distract ourselves from our primary purpose as a publisher — to champion the books we believe in and love.”

Most of the controversies have revolved around memoirs and challenging the right of self-serving or dishonest authors to have a platform. This issue has become especially acute for publishers in light of the previous administration and the GOP having been dominated by crooks and liars. Post-administration memoirs are normally a staple of the publishing industry, but how can you justify giving a voice to this crew?

Pulling a book due to the author’s personal life is a bit more of a grey area. The Me Too movement has brought down a number of men in the performing arts, but it has been rarer in book publishing. Mark Halperin, James Dashner and Sherman Alexie have had books dropped over sexual allegations in recent years. Regarding the Philp Roth biography decision, PEN America head Suzanne Nossel said “If we were to apply that standard writ large there would be thousands of books by bigots, misogynists and miscreants that could be removed from circulation on those grounds.” The National Coalition Against Censorship also expressed concerns:

Books must be judged on their content. Many of literature’s celebrated authors led troubled–and troubling–lives. While a writer’s own biography can certainly impact our interpretation and analysis of their work, the reading public must be allowed to make their own decisions about what to read.

In the early 20th century, publishers frequently made decisions about what was “appropriate” literature for the reading public, attempting to stifle “immoral” content. The industry was rife with censorship. The increased pressure on publishers today to police the morality of their writers threatens to turn back the clock on publishers’ defense of the unfettered expression of ideas.

The ongoing cultural reckoning of what to do with the art of morally-compromised artists is a complicated one. Erasure and silencing can gratify the desire to punish, but it does so at the cost of constraining the circulation of ideas. People who reject Blake Bailey’s work are free to do so. Others will want to read it whether or not he is guilty of the allegations against him. Readers deserve the right to make this choice for themselves.

On the other hand, the fact is that Philip Roth’s life and his writing are filled with misogyny, so if his biographer is revealed as a sexual assaulter and misogynist himself, can that book be viewed a legitimate? There was already a lot of criticism against Blake Bailey’s work. Roth had hand-picked him as his biographer; perhaps it is because Roth recognized in Bailey a certain kindred spirit who would whitewash certain elements. As Judith Shulevitz puts it in The Atlantic Monthly:

Untangling the opprobrium from the work is tricky, though, and especially so in this instance. Roth was serially enraged at the women who came in and out of his life, with very rapid turnover, and he represented many of their fictional counterparts as sexual playthings. Roth’s rancor toward women is part of the story….So maybe Bailey’s alleged behavior with women has some bearing on how he wrote about Roth’s behavior with women and how he assessed the relationship between Roth’s behavior and Roth’s books.

In a similar vein, Katha Pollitt writes in The Nation (although she ultimately feels the book should remain available and the public should decide for themselves):

The accusations against Bailey sting because they rhyme so closely with the often-dismissed view of Roth as contemptuous of women, sexually exploitative, vengeful, and narcissistic. It is harder now to see Roth as analyzing misogyny, as his defenders have argued, exploring it through out-of-control protagonists like Nathan Zuckerman and Mickey Sabbath, rather than actually being, under all the masks and selves and wild comic energy and endlessly inventive prose, a misogynist himself. Despite his best intentions, Bailey ends up making the case.

Cynthia Ozick’s glowing review on the front page of The New York Times’ Sunday Book Review downplayed Roth’s misogyny to such a degree that it has drawn a variety of blistering responses, such as “Ozick only briefly mentions the author of the latest Philip Roth biography before devoting the bulk of her bulky review justifying the problematic Roth and his uneven oeuvre. She is particularly harsh on the legion of women Roth dumped, dismissively stressing they were all “ardently consensual.”

In the end, there does exist a solution to these controversies: Men, stop diminishing, disrespecting, molesting, assaulting and raping women.