Send a Runner: A Navajo Honors the Long Walk, by Jim Kristofic and Edison Eskeets, is one of those books that manages to be simultaneously uplifting and melancholia-inducing.

The inspiration comes from Edison Eskeets himself. He is a Navajo, or Diné, a former All-American runner who also ran running camps for youth all around the Reservation. In 2018, he decided to honor the 150th anniversary of the Navajo return to their homeland after the Long Walk by running the route, 330 miles in 15 days, roughly a marathon each day. He was 59 years old at the time. 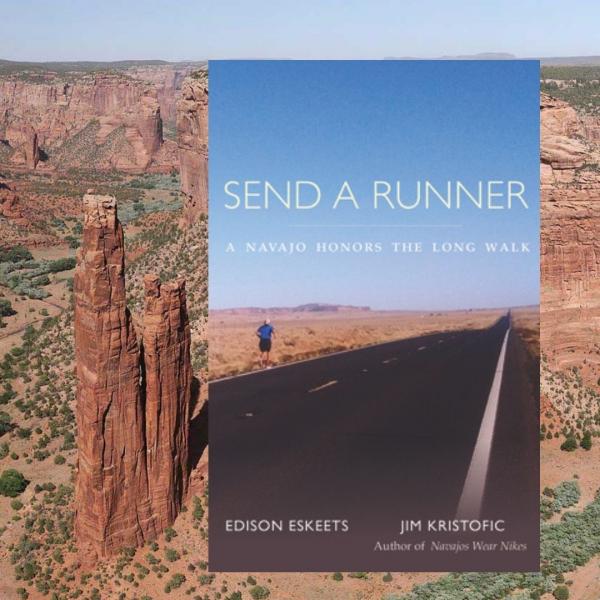 The melancholy comes from reading the history of the Diné tribe from their first encounters with the Spaniards, and up to and including the Long Walk itself. It is a violent history, filled with slaughter, village-burning, livestock theft and enslavement. Not all was against the Diné, it is true: they defended themselves with at times deadly force as well. But as the decades flow by, their losses grow inexorably, culminating in 1864 with the U.S. Government forcing them from their land in what has come to be called The Long Walk. This forced march to a barren, military-controlled location in eastern New Mexico resulted in so much death and demoralization that it can only be seen as an attempt at ethnic cleansing. It is estimated that one-third of the Diné died.

“The Diné are adopting a name for the Americans. Bellicanas. Biligaanas. The Fighters. There is another meaning in the name. Some say Bilání joghal’ndi — They Are Many and Keep Coming.”

The book is divided into fifteen chapters, one for each day of the run. Each chapter, in turn, alternates between Eskeets’ run, and the history of the Diné people. Eskeet is charming. He is serious about the history and the perished he honors; he is playful, with a wry humor; he is steeped in the lore and mythology of his people and of the landscape he passes through; at times, he is doubtful about his capacity to finish the run as pain wracks his body.

“I ask if he’s heard voices on this run so far. “It’s many things,” he says. “It’s so hard to say now. I’m picking up so many emotions, many feelings. Right now it’s like a tumbleweed just rolling around. There’s many feelings. Frustration. Love. Anger. Someone died near here. Someone got married near here. It’s like a tumbleweed, just spinning. That’s how I know it’s real. That people actually lived here.”

“So many people have asked me, ‘What’s the meaning?’ They are asking why I’m doing this. And I’m trying to explain to them that I don’t fully know. It’s so many things. Many voices. Many people….I’m thinking about the old ones. I’m looking toward the Great Ones. And the old ones. The ones who actually chiseled with language the songs and dances that connect us to this place.”

“I need just quiet time to recover from the experience. It’s strange. I’ve never needed that before. I think it’s the age. But I’m also feeling a lot. A lot. There are burial grounds all along here. It’s where they would have walked. They were traveling over there. The children wouldn’t make it. The grandparents couldn’t make it. The parents would dig a little grave. They’d say, ‘We put you in there. We’ve tucked you in. Be well.’”

“In the old ways, the hoghan is actually not a house. Ho-ghan. That’s the landscape. The hoghan. The shelter was just a place to sleep. It was the land that was actually your home.”

The alternating historical narrative of loss, betrayal, and death is wrenching, made all the more so by the matter-of-fact tone, often understated, sometime poetic. “It is all the same: sprawling gangs of criminals called governments pulling people into the furnace to smelt a thing called Power.”

“These five men push the army to move seven hundred troops into Navajo country. These troops will kill every man they meet. They will burn every cornfield they find. Sumner says it will give him great pain to do this. But words mean nothing in this country. They fall to the ground and shatter.”

“In the meantime, slaving parties ride out from the Rio Grande. Navajo children vanish and reappear as baptized Catholics in the households of Albuquerque and Santa Fe. It is a dark magic.”

“The war comes. The elders die first. Then the children. You have just killed your past and your future.”

Edison completes his run in 15 days

For Edison to run a mile, he had to take 1600 strides to push himself forward….[O]n each stride, most runners push themselves three inches into the air. This means for each mile, Edison pushed himself 400 total feet into the air. Everyone knows Edison traveled 330 miles forward through space to reach this place. But not everyone might contemplate that he also traveled almost 25 miles into the sky, well beyond the boundary of the stratosphere, above the clouds. Where the Great Ones live and watch and speak.

As he sucks down the fruit salad, I don’t ask him anything. His feet are on the earth. His mind is up there, with the Great Ones. The Ones who greet you with Yá’áát’ééh.”

A beautiful book, inspiring, deep. Yes, and filled with sadness as well, but it is ultimately a sadness that serves not to dispirit, but rather to hearten, to inspire the resolve that keeps memories alive and dreams empowered.