The Shattering: America in the 1960s, by Kevin Boyle

I had a 1960s boyhood, growing up in San Jose, California, just 50 miles from San Francisco, Berkeley and Oakland, where so many of the influential events of the decade took place. I can’t say any of it had much 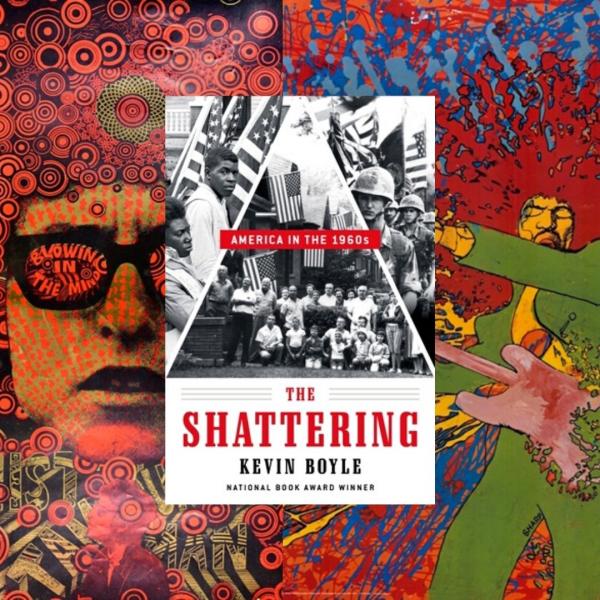 influence on my life back then. My parents were Republican-leaning, though not rabidly conservative, and my paternal grandparents were New Deal Democrats. I had other nearby relatives who I now realize were John Birchers, but their politics were peripheral to our lives. I recall the major news of the era, the assassinations and riots and Vietnam. I recall the mother of a family who watched me after school looking out her kitchen window at me playing with a Black boy, one of the very few in the neighborhood, and duly reporting it to my mother, who was unconcerned. I recall my grammar school policing skirt lengths of the students, but also teaching about the evils of racism. My politics through high school generally reflected the low-key conservatism of my parents.

But while my childhood feels as if it skirted the 1960s, I fully understand that the decade has had an enormous influence on my post-Sixties adulthood. As I read more widely, as my family moved to the suburbs of Philadelphia in 1969, and I moved into a diverse Philly neighborhood in 1976, as I began traveling the world, my politics became more and more liberal. And at the heart of my liberal politics were the continuing clashes over social policies and mores unleashed during the Sixties.

Kevin Boyle’s new book The Shattering: America in the 1960s offers a deep dive into how the decade shattered the complacency that dominated much of America in the post-WWII years, while also taking a look backward at the powerful currents of non-complacency simmering among certain sectors. It also offers a look forward at how the conservative backlash has evolved into the toxic ideology of today.

In 1960, the population was over 85% white, and immigrants’ share of the population was the lowest it had been in over a century. 72% of adults were married, and 88% of school-age children lived in two-parent households. Boyle cites sociologist Daniel Bell’s influential essay The End of Ideology, in which he posited that the political battles between right and left had been exhausted by the New Deal and the Second World War, and that all that remained was to tinker around the edges, a “middle way for the middle-aged.”

Boyle does a good job of showing the fissures beneath that complacent veneer in the late 1940s and 1950s: the Republican turn toward stoking anti-Communist panic, as well as the Lavender Scare pushed against LGBTQ people; the expansion of the suburbs and the demolition of urban neighborhoods; the concessions Roosevelt had made in limiting access to New Deal programs in exchange for securing the support of the southern states dominated by Democratic Party segregationists; the long civil rights struggle leading up to the 1954 Brown v. Board of Education desegregating schools and the bitter backlash it created.

The great battles of the Sixties are also well-told. The civil rights movement in the South, both in its tenacious courage and in the murderous tragedies of its backlash, “had thrust into the center of public life the question of equality, perhaps the most volatile question the nation can face, since it cuts to the core of the American creed.” So great was the pressure that if forced a reluctant Kennedy to act, and inspired Lyndon Johnson to act aggressively to stay in front of the progressive movement. He covers the judicial decisions on contraception, interracial marriage, and abortion. He highlights the 1968 Green v. County School Board case, which clarified that school districts needed to remedy segregation “now”. The Brown v. Board of Education decision had called for remedies to reached with the vague loophole “with all deliberate speed”, which resulted in nearly 200 lawsuits against southern school districts being stalled for years. Now desegregation regained momentum. The Vietnam War and the protest movement it inspired get comprehensive treatment. The rise of Black Power and the Students for a Democratic Society are covered, as are the hippies and Ken Kesey’s Merry Pranksters.

And like all good histories, The Shattering offers insights into our own times. Reading about the tremendous pressure brought to bear on the Senate, by both LBJ from the White House and civil rights groups from outside government, to get break filibuster against the 1964 Civil Rights Act makes me wish more pressure was being brought to bear today. The descriptions of how urban riots, such as Harlem in 1964, Watts in 1965, and so many more were sparked by police brutality against Blacks certainly echo into our times.

The progression of conservative politics over the past 50 years is also illuminating. In 1964, Republican presidential candidate Barry Goldwater was easily defeated by portraying his politics as too extreme for the times, even though he campaigned more on free enterprise, small government and anti-communism, and not against the civil rights advances (which he largely supported).  But by 1968, the overtly racist presidential campaign of Alabama governor George Wallace gained a dangerous level of national support even in a campaign dominated by Vietnam.

In 1965, the federal government helped register 100,000 black voters in Alabama, but Wallace added 110,000 white voters, inspiring him to take his campaign of racial fear to the national level. He had solid support in the South and was steadily making inroads into the North. Harris Polls projected he could win 30% of the vote if the trends of the summer continued, not enough to win, but enough to force concessions. Polling also showed that two-thirds of voters felt “something was deeply wrong” with the country, and their concerns focused not on inequality, injustice or the war, but rather on radicals, agitators and criminals. The year before, during the 1967 urban unrest, 45% of whites polled felt the riots were instigated by radicals trying to provoke revolution, and 34% believed their neighborhoods could be threatened by Black revolt. The ‘my country, right or wrong’ backlash to the anti-war movement was also on the rise.

A speech early in Wallace’s campaign foreshadows Trump: he lashed out at civil rights agitators, welfare cheats and radical longhairs, he accused the press of looking down on ordinary Americans, castigated the government for telling school districts what to do and destroying local control, decried that people had to live in fear of riots and weren’t free to live in neighborhoods with people like themselves. In another speech in Rhode Island in July, he lashed out at a group of Black and white hecklers: “These are the folks that people in our country are getting sick and tired of. You’d better have your day now because after November, I tell you, you’re through.” The crowd cheered and shouted racist epithets.

It was probably Wallace’s choice of General Curtis Lemay as his running mate that forestalled disaster that time. LeMay, who believed nuclear weapons were a valid use of force in many situations and was the inspiration for the crazed characters General Jack D. Ripper and General Buck Turgidson in the film Dr. Strangelove, scared voters, and Wallace’s support collapsed.

And as in all good histories, it is filled with interesting tidbits. The little-known concept of ‘executive privilege’ was used by Eisenhower to fight back against Joseph McCarthy’s accusations of a government riddled with Communists. Nation-building as a concept grew out of the Vietnam War. The inclusion of ‘sex’ as a protected category in the Title VII prohibition of employment discrimination in the Civil Rights Act was a late and almost inexplicable addition which nevertheless passed. Betty Friedan, author of the groundbreaking feminist book The Feminine Mystique, referred to women’s dependency on their husbands as “a comfortable concentration camp”, a Holocaust-echoing phrase that probably wouldn’t pass muster nowadays. LSD wasn’t made illegal until 1966. Thurgood Marshall, first Black Supreme Court Justice, was nominated and approved against the backdrop of the 1967  ‘long, hot summer’ of 159 urban riots.

The book isn’t perfect, of course. Having just reviewed a book on the life of Fannie Lou Hamer a few weeks ago, I though Boyle gave short shrift to her contributions leading up to the 1964 Democratic National Convention. Some of his dramatic framing devices seemed a little stretched, such as linking the “six deaths” of 1963—JFK, Vietnam president Ngo Dinh Diem, and the four Black girls killed in the Birmingham church bombing by racists—as bringing “to the surface the dangerous currents that ran through the United States in the early 1960s: the sheer brutality of white supremacy, the amorality of American Cold War foreign policy, and the extreme passions that policy unleashed”. He also uses the Cahills, a white Chicago family as a framing device for the book, and they or their neighborhood make Zelig-like appearances throughout the book. Interestingly, as the book ends, they cast their vote for George McGovern.

I think there have been many ‘shatterings’ in U.S. history. Certainly the last century saw the Great Depression/World War II years upend the expectations of the citizenry, as much or possibly more than the 1960s. The nation survived. We seem to be going through a new ‘shattering’ today in this Age of Trump, and I can only hope we survive. On the one hand, it was reassuring to see how the nation pushed through so much violence and division in the Sixties. On the other hand, the continuing unresolved issues seem endless, the upward progression in electoral success seen from Goldwater through Wallace to Trump is unnerving, and the impact of social media is daunting.