Here are some of the biggest fiction titles coming out in October, and all are available for pre-order now. 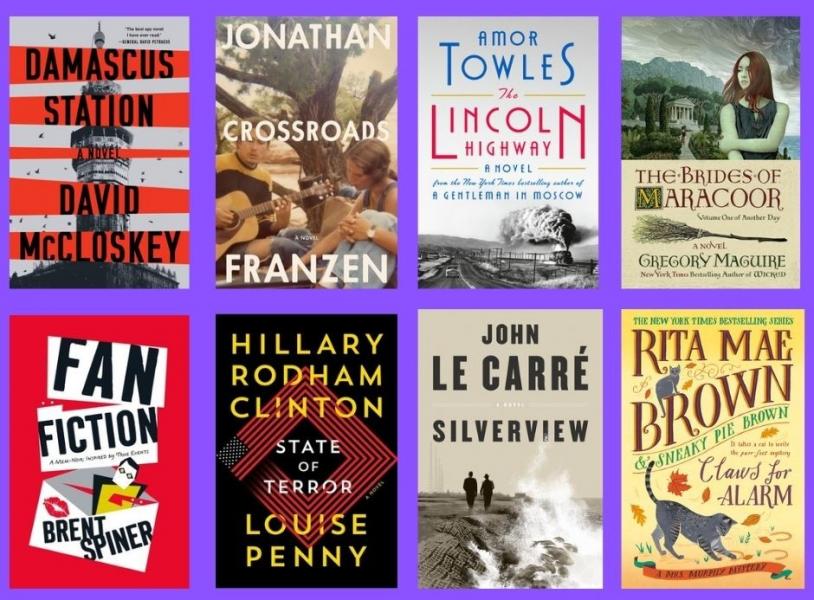 In mysteries and thrillers, we have Silverview, a posthumous spy story from the master of the genre  John le Carré, coming out October 12th. Mystery master Louise Penny teams up with Hillary Rodham Clinton for the political thriller State of Terror, arriving October 12th. John Grisham brings a new legal thriller, The Judge’s List, on October 19th. On October 12th, Josh Malerman scares us with another horror story, Pearl (note that this is actually a reissued version of his earlier book, On This, the Day of the Pig, in case you read it back in the day). Damascus Station, by David McCloskey, is a ripped-from-the-headlines political spy thriller, coming out October 5th.

A number your favorite series are getting new additions, and there are also some brand new series just getting started. Rita Mae Brown and Sneaky Pie Brown are back with another feline Mrs. Murphy mystery in Claws for Alarm, arriving October 12th. The fourth volume in Alice Hoffman’s Practical Magic series brings the story to its conclusion: The Book of Magic comes out October 12th. Elizabeth Strout gives us more of her indomitable character Lucy Barton in Oh, William, coming out October 19th. Famed fantasy writer Terry Brooks kicks off a new series about a magical race of beings with Child of Light, coming on October 19th. Geoffrey Maguire is also kicking off a new series, this one spun off from his four book Wicked series based on the Wizard of Oz. The Brides of Maracoor features Elphaba’s granddaughter Rain, and comes out October 12th.

Finally, in a category all its own is Fan Fiction: A Mem-Noir: Inspired by True Events, by Brent Spiner. Yes, THAT Brent Spiner, Commander Data of Star Trek: The Next Generation. It promises to be a wild ride, and it comes out on October 12th.